Dr. Paul Moschella, 89, of Farmington, died Friday, February 28, 2014 at Amberwoods in Farmington. He is survived by his wife, Jeanne (Bonetti) Moschella of Farmington; his son Jeffrey and his wife, Maria of Melbourne, FL, and a niece, Patricia Rohan of South Windsor. Paul was born in Newton, MA in 1924, where he began his life-long quest for knowledge- first, in his early years as a graduate of Boston Latin and then Newton High School. Paul was a United States Army veteran of World War II and upon his return from service he continued his education at MIT where he earned a BSME in 1947 and a BSIE in 1949. He soon acquired an MSEE from RPI and ultimately earned his Ph.D. in Business from the University of Massachusetts at Amherst. These years of education were put to excellent use during his career-building years. First at- United Aircraft’s Hamilton Standard Division, where he was soon promoted to Chief Industrial Engineer in the Division. Secondly- as Chief of Manufacturing Planning for United Aircraft Corporate Systems Center, after which, he became Director of Operations, Military Systems Division for Lockheed Electronics Co. Being himself a beneficiary of education, the importance of passing on to future generations the need to learn was uppermost in Paul’s mind. He now focused on the classroom and his desire to teach others. He first served as Adjunct Professor of Management at the Hartford Graduate Center of RPI and then at the University of Hartford where he would enjoy 30 satisfying years as a Professor teaching Strategy in Business. He garnered the respect and admiration of peers and students alike. Paul’s life-journey was centered on Education. First, his own and with his growing appreciation of its value, his desire to educate others. In that goal, his was a life well-spent! In his private life, Paul carried his competitive spirit into his enjoyment of the game of tennis at Farmington Farms for 30 years. On the court is where he met and enjoyed the friendships he so valued. He took pleasure in active membership with others in The Italian American Service Organization (UNICO), as well as maintaining an abiding interest in the MIT Club, Habitat for Humanity, and The Fidelco Guide Dog Foundation to which he was a generous contributor, strongly believing in their mission. A memorial celebration of Paul’s life will be announced at a later date. Memorial contributions may be made in his name to Farmington UNICO, P.O. Box 238, Farmington, CT 06032 or to Fidelco Guide Dog Foundation, Inc., 103 Vision Way, Bloomfield, CT 06002.

Joseph D. Filomeno, CPA, 85, of West Hartford, (CT) beloved husband for 39 years of the late Yolanda Lynn (DiLoreto) Filomeno, passed away peacefully on Sunday (October 6, 2013) with his family by his side. Born on November 22, 1927 in Hartford, he was the son of the late Salvatore Sam and Mary (DeFranco) Filomeno. He was a 1945 graduate of Bulkeley High School. After serving in the Army, he graduated from UConn with an Accounting degree in 1951. Joe was always looking to improve life for himself and those around him. The son of a fruit vendor, Joe went to college, became a CPA and went on to establish Filomeno & Company in 1966, a prominent accounting firm in West Hartford. He now joins his loving, devoted and supportive wife Lynn in heaven. His greatest joy was his Cape Cod home: summers filled with fishing, boating, cookouts and making his famous baked stuffed clams. He especially enjoyed Sundays on the outer beach with his wife and family, sharing laughs and smiles. He will be dearly missed by his three loving sons and daughters-in-law, Daniel and Franca of Rocky Hill (CT) Thomas and Madelyn of West Hartford (CT) and Michael and Jeannie of Longmeadow, MA. He loved and was extremely proud of his nine grandchildren and their accomplishments, whether it be sports, school or college graduations: Mark, Joseph, James, Nicholas, Christopher, Madelyn, Alexander, Jacquelyn and Taylor. He is also survived by two beloved sisters, Anna DiCiccio of Wethersfield (CT) and Marie Rizzio of Old Saybrook (CT); his sister-in-law, Elizabeth DiLoreto of Farmington, plus 13 wonderful nieces and nephews who were all so special to him. Funeral services were held October 10th in Connecticut. Donations in Joes memory may be made to either the St. Francis Hospital Oncology Department and mailed to: St. Francis Foundation, 95 Woodland St., Hartford, CT 06105 or The Filomeno Family Accounting Scholarship Fund-please make checks payable to The UConn Foundation, Inc., 2390 Alumni Drive, Unit 3206, Storrs, CT 06269. 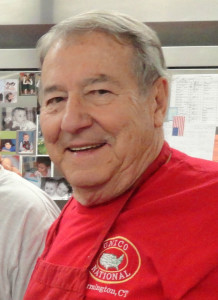 Farmington, CT – Raymond Thomas Lavendier, of Farmington, CT, beloved husband of Emilia (Viscosi) Lavendier, passed away peacefully Wednesday, October 21, 2015 at his home. Born June 20, 1925 in Worcester, MA, son of the late Nelson and Flora (Lacroix), he was part of the “Greatest generation.” Raymond enlisted in the United States Navy in June of 1942 at the age of 17. He was a member of the amphibious forces and took part in North Africa, Sicily, India and Burma campaigns. He participated in the first wave of the Normandy Invasion on Omaha and Gold Beach on June 6, 1944 and was one of the few D-Day survivors awarded the French Legion of Honor Medal in 2009. Raymond returned to Normandy for the 60th anniversary and 70th last year with his children and grandchildren. He married Emilia (Viscosi) in 1951. He began his career working evenings full time at Shawmut Bank in Worcester, MA while attending college full time on the GI bill and graduated from Clark University. The first 2 of his 5 children were born while commuting to Boston University for a Master degree program in Sociology. Raymond and his family moved to Farmington, CT in 1957, and he became a partner with Bristol Flow Gasket Co. He founded Connecticut Cap and Seal Co in 1965, retiring in 1997. He was proud of his family and passed on his passion for athletics and community service. He coached the Plainville YMCA boys swim team and was a swimming official. Raymond was a long-time member and President of the Farmington Field Club, President of The Farmington Recreation Association, President of UNICO, built homes with Habitat for Humanity well into his 80’s and was a member of the West Hartford Squires, VFW. He loved skiing with his family in Vermont, playing paddle tennis and traveling. Raymond competed in, and held International Masters swim records. He also competed up until the age of 80 in USTA New England tennis tournaments. Besides his wife of 64 years, Raymond is survived by his loving family, his sister Louise Sullivan of Worcester, MA, 5 children: Marie Lavendier and husband Paul Canning of Farmington, Ann Jacobs and husband James of Avon, Joseph Lavendier and wife Marfie of Newcastle, ME, Patricia Lavendier of Farmington, and Suzanne Crews and husband Robert of South Burlington, VT, nine loving and adorable grandchildren who were the joy of his life, Christopher Canning of Moab Utah, Nicole Canning of Farmington, Jennifer Jacobs of Avon, the late Christina Jacobs, Ethan Lavendier and wife Amelia and their daughter Ember of Gorham, ME, Samuel Lavendier of Portland, ME, Jonathan Fugge of Farmington, Kathrine Fugge of Boston, MA, Alyssa Crews of Boston, MA and Rachel Crews of Boston, MA, along with several nieces and nephews. Raymond was predeceased by his parents, sister, Pauline, son-in-law, Paul Fugge and granddaughter, Christina Jacobs. The family would like to extend a special thank you to Raymond’s caregivers, Esther and A.K. for their kindness and compassion the last few days of his life. To send online condolences to the family, please visit

Joseph J. “Shoosh” Algiere, 93, of Farmington, beloved husband of the late Catherine P. (Gencarelli) Algiere, passed away peacefully Sunday, December 13, 2015 at the home of his daughter and son-in-law in Maryland. Born October 8, 1922 in Westerly, Rhode Island, son of the late John and Nancy (Amato) Algiere, he resided in Farmington since 1960. Joe was a United States Army veteran of World War II seeing active combat duty on the Burma Road and in China, India and also in Central Burma. Joe was a business owner and entrepreneur, having been the original founder of Bess Eaton Donuts and The Whole Donut Corporations. He was a member of UNICO, the West Hartford Squires and the Knights of Columbus. Family was of the utmost importance to Joe. He was an excellent father and greatly enjoyed the time he spent with his children and grandchildren. He was a hardworking and successful businessman who was very generous and enjoyed the simple things in life. He loved gardening and could fix anything. He touched a lot of people’s lives in many ways. Joe is survived by his three children, John J. Algiere and his wife Nancy of Simsbury, Louise A. Carlson and her husband David of Columbia, Maryland, and Robert J. Algiere of Avon, his sisters, Theresa Pucci and Evelyn Anderson both of Westerly, Rhode Island, his brother, Franklin Algiere of Westerly, Rhode Island, seven grandchildren, Patricia Consiglio and her husband Christopher, Kathryn Campbell and her husband Charles, Joseph Patrick Algiere, Elizabeth Algiere, Brian Carlson and his wife Rebecca, Kevin Carlson, Jacob Algiere and two great-grandchildren, Ryan Consiglio and Henry Carlson.

Anthony DiBiasio of Farmington, CT and Naples, FL passed away peacefully on January 14, 2017 at 90 years of age. Devoted husband of Adele (nee Lenhardt). Beloved father of Alisa (Jaime) Correa and Adele (Dennis) Ruppert and grandfather of Christina, James, and John Correa and Adele and Gwen Ruppert. He leaves behind dear sisters Mary Julian and Theresa (Robert) Seravalli and many cherished nieces and nephews, friends, and neighbors. He was predeceased by his brother Peter. Tony enlisted and served in the Navy during WWII in the South Pacific aboard a PT tender. He graduated from Farmington High School and Bryant College, and worked at GE in Plainville, CT for over 30 years. Tony was an active and lifelong member of the Church of St. Patrick in Farmington and was a charter member and past president of the Farmington Chapter of UNICO National (An Italian men’s service club). In retirement, he volunteered at the American Red Cross and J. Dempsey (UCONN) Hospital. He was a lifelong golfer, enjoyed playing cards with his buddies at the Pars, and was always happiest in the kitchen cooking for those he loved. Visiting hours will be held Friday February 3, 2017 from 4 – 7 pm. at the Taylor & Modeen Funeral Home 136 South Main St., West Harford. A Mass of Christian Burial will be held on Saturday February 4, 2017 at 10:00 am. at the Church of St. Patrick 110 Main St., Farmington. Burial will follow at Riverside Cemetery in Farmington. In lieu of flowers, donations in his memory may be made to Farmington UNICO for their College Scholarship fund, PO Box 238, Farmington, CT 06034 or Avow Hospice, 1095 Whippoorwill Lane, Naples, FL 34105. For online condolences and directions please visit www.taylorandmodeen.com